Craig's New Hobby - An Avenue to Find Normal People who do not run away screaming. 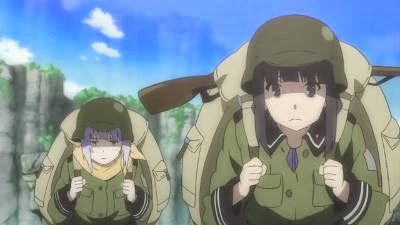 There's a lot of nonsense out there, ever since Private Benjamin, I guess, about ladies in combat or girl soldiers or whatever you want to call them. Well, that sort of thing is a lot of fun, but has no actual relation to reality, as any safely retired military officer will tell you. But that's about soldier stuff, you know, fighting.  Carrying fifty pounds of junk on your back and slogging through mud and trying to kill other people while they try to kill you. That's kind of a guy thing.

There are, of course, exceptions to that, but they have to be really great exceptions to be practical. You can't just include girls in an infantry platoon because they can pass all the tests.  They have to be a lot more than that to offset the enormous downside of a mixed-sex military unit.  They have to be, well, Joan of Arc or the equivalent.  And, lo and behold, L. Neil Smith has gotten extremely Heinleiny again and written about just such a girl.  Here's a chapter from his forthcoming General Jenny:

A Chapter From General Jenny
a Forthcoming Novel
by L. Neil Smith and Craig Franklin


[AUTHOR'S NOTE: A little while ago, L. Neil Smith's The Libertarian Enterprise ran an earlier chapter of theis work-in progress I've been writing with my old friend, libertarian singer-composer Craig Franklin.
In the story so FAR, 'way down South, where the continents meet, a Miskito Indian village shaman tells his followers of a warrior spirit, in the form of a girl, a sort of latter-day Joan of Arc, who will help their people throw off a murderous dictatorship. Asked if this is a prophecy, he shakes his head, and shows them a worn, dirty newspaper clipping ...
In the following episode, it's a few weeks earlier. Colorado Springs high school student Guinevere "Jenny" Knox is a direct descendent of General Henry Knox, one of the American Revolution's greatest and cleverest heroes. From then until now, all the men in her line have been Army officers, although none has risen above the rank of colonel. Jenny has been determined since she was four years old to become a general.
Zimmerman High School is a private institution with unusual methods; its students like to think it was named after singer/writer Bob Dylan. Giving a report in her history class on the Chinese military genius Sun Tzu, Jenny is laughed at when she tells the famous story of his having trained the Emperor's concubines in the Art of War. Her teacher, a socialist who has always disliked her, goads her into betting football captain Kip Flanders she can teach the cheerleaders to defeat his team in a paintball game she describes as "Last Man Standing".
Sergeant Hathaway is a Marine veteran in charge of the Zimmerman High School ROTC program. He likes Jenny, who is his brightest and most accomplished junior officer, but he is certain she's about to be humiliated.
Elodia is the daughter of the Mexican consul. Serenity's parents are hippies and she is morally uncertain about this battle she's about to fight.
Having befriended the pep squad's beautiful and athletic captain, Pepper Davis—the "Daphne" to her "Velma", as Jenny sees it—puts the other cheerleaders solidly on her side. And the game is about to begin ...  MORE

Posted by Melinda Pillsbury-Foster at 5:56 AM No comments: