A Truth in Advertising Moment for Craig of Santa Cruz

More Sugar Daddy Moments
Than You Can Believe


For anyone who actually knew Craig, especially his victims, the profile below is an eye-roller.

This is the standard profile Craig used for his multiple, multiple sugar daddy accounts for years.  I know because one of his former girl friends, who he had destroyed financially in what I began identifying as the, "Build-Up and Kill Delight," gave me the passwords.  She had them because after rendering her homeless and destitute Craig decided it would be fun to offer her a pittance to find him other women.  This was intended to be humiliating and degrading and, rest assured, this is how the woman involved experienced it.

The Delight was all for Craig, naturally.

It is important to know psychopaths do not 'get into relationships.'  Viewing the interaction this way is like a steak thinking it has a relationship with the diner who has a fork and knife poised over the plate but is smiling at it.  Yummm.

Craig played out his Build-Up and Kill Delight with variations during multiple encounters with his victims.  Most of these were young females of adult years, sort of.  But what he really wanted was a daughter with which to play out the Delight.  That is why he says he wants children.  He is hoping at least one of the three children will be a baby girl.  All of these scenarios included lavish presents and an insistence Craig be allowed to provide his 'beloved' (the steak) with an income while they achieved, finally, their most cherished goal.  Generally this was starting a business.

Losing your funding at a critical time can, and did, make some of these women homeless along with their children.

This was essential to the final Delight.  This is when he rapes them, brutalizes them and grabs back everything he gave them.  He likes arranging it this way to increase the shock and pain.  Knowing he is causing pain is a big part of the pleasure he extracts from this scenario.

Note this profile below is 2009.  The income line has changed.

Craig was eased out of Green Hills Software, Inc., because Dan O'Dowd and likely Dan's wife Amy Chang, had realized Craig was dangerous to their continued enjoying of the billions of dollars they had acquired through DOD contracts and contracts as suppliers to other DOD companies.  Also view INTEGRITY Global Security, LLC.

Dan, Amy and the small but tight crew of original co-conspirators who stole Green Hills for Dan's partner, Glenn Hightower, are marginally more normal than Craig.  But conscience is a thing alien to them.

Otherwise how could they delight in piling up billions by making outrageous profits through supplying the United States war machine, all of which ends up in the pockets of - you got it - the Multi-National Corporations who own and run the U. S. government.

NOTE:  Dan and Amy pile of billions, being inherently stingy they limit their c0-conspirators to millions.  But that is how these people are, you know.

Dick Cheney might have dropped a hint in their ear on this point since in 2003, when GHS started getting those lovely DOD contracts, Dan and Craig had helped them out with two sticky problems.  I have not yet found out it Hillary Clinton also received the same kind of assistance - but she could have.  Certainly the Multi-National Corporations and their U. S. government partners (these two henceforth referred to as a single entity denoted as 'Greedville),'  The Greedville business plan is laid out in more detail at Greedville.biz.

Craig's IQ, which he will tell you at first meeting is 180, does not aid him in the slightest when it comes to being locked into an absolutely repetitive sexual scenario which is criminal in so many ways I'll not bother to list them here.

It was doubtless this danger which finally moved Dan first to distance Craig through FireFly, the sad little corporation that flopped,  and then cut him off.  Of course, this provides no immunization under law and the Statute of Limitations Ploy is now entirely exposed for what it is, carried out while attempts to destroy the victims continue unabated to the present moment.

The class action lawsuit should include all of the women, children, and other family members victimized and the perpetrators should be named, don't you think?  If you are a victim I have not yet interviewed get in touch via the CONTACT FORM to the top right of this site.

Psychopaths with high IQs are dangerous to all of us, both personally, culturally, and when they manage to work their way into positions of trust in every sector.  Dr. Robert Hare, a world respected expert on the condition recommends the officers of corporations be tested.  To that I would add  all candidates for public office as we work toward moving governance back to its original Constitutional form. 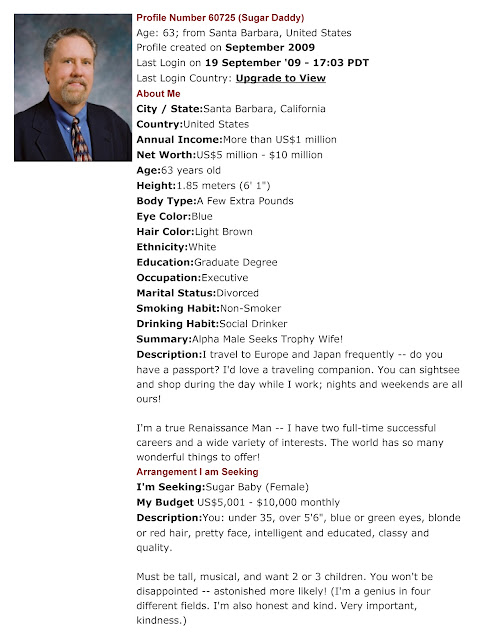 Just so you know, if it is not obvious, this whole profile is designed to snare women who are generally all too credulous.  Craig does not have a kind bone in his brain, where the world is all about him, him, him.

But today I found out he has been using my name in his attempts to evade more disclosure.

Posted by Melinda Pillsbury-Foster at 9:36 AM No comments: